Ben Affleck - You had a chance and you blew it!

I agree wholeheartedly with professor, Michael W. Twitty in his observation on Ben Affleck's (past "Daredevil" and present  Batman) wimp-out about his genealogical results on his episode of "Finding Your Roots" with Skip Gates. Ben had an opportunity to both share and embrace ALL of his history but by deciding not to allow inclusion of the fact that he had a slave-holding ancestor in his episode, rejected the chance to show the delicate, maddening, undeniable link that many White Americans have with native-born Americans of African descent. Mr. Twitty's post says all that Ben declined to face.

http://afroculinaria.com/2015/04/22/i-cant-hide-mine-please-dont-hide-yours-an-open-letter-to-ben-affleck/
Posted by PJ DEAN at 5:23 PM No comments:

We have another party and prize giveaway. Come join the week long SFR SHINDIG at blog captain and fellow author, HEATHER MASSEY's site, THE GALAXY EXPRESS! For 8 days she will be highlighting posts by guest bloggers (Guess who is one? Go on and try. Big Hint. My post appears on MAY 1st) PLUS! PLUS! There is a wonderful giveaway package. Comment any time during the lenght of the contest period and be automatically entered to win a 15$ KINDLE card and 7 ebooks! count 'em s-e- v-e-n! Thank you from the bottom of my heart for your participation and good luck.

P. S. AND do not forget the APRIL FOOLS IN LOVE event, sponsored by SFR STATION is winding down. Visit the post (several entries down to enter the raffflecopter giveaway! Seven days left!
Posted by PJ DEAN at 10:50 AM No comments:

This blog hop promotes the paranormal sub-genre of romance. Hosted by author, Clare Dargin, her site sponsors PARANORMAL LOVE WEDNESDAYS on her site to introduce paranormal writers' work to readers.

I'm P. J. DEAN and I pen THE FELIG CHRONICLES series. The books follow the exploits of alien-fighting couple, Tina Cain and Nate Lowe. No, the Felig aren't vamps or shifters or weres. They are life-sucking winged baddies who'll leave you a shell when they are done. But not if Nate and Tina have anything to say about it. There are four books so far in this series which cover the Feligs arrival, their missions, Nate and Tina's initial meeting, their developing love story, and their joint vow to rid Earth of the invaders. Give the saga a try. It's not over yet.  You won't be disappointed.

READING ORDER FOR THE SERIES: 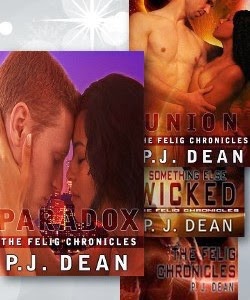 Gentrification happens. And it is painful as it rips apart a neighborhood. Anyhoo, the current phase of gentrification going on now in big cities is not new. It's a long, time-honored tradition of moving settled folk from where they could afford to live, and where they had been TOLD to live, to someplace else to make room for loaded folks who want convenience. Makes no difference that these previously undesirable neighborhoods house close-knit communities. Pshaw! (Did I just use pshaw? oh my.) Somebodies want it now because the spots are convenient to the theater, to restaurants, to...PARKS! Nice segue if I do say so myself. Read about the demise of Seneca Village, NYC. Think of Seneca Village NYC every time you hear a hipster, or a white-collar commuter who is tired of the long commute back to that McMansion in the 'burbs, gush about that steal of shell of a house in the city not far from the PARK that they got a leg up on from a realtor. Seneca Village. The more things change, the more they stay the same.

Billie Holiday - April 7, 1915 would have been her 100th birthday. Happy Birthday, Lady Day

The legendary songstress, Billie Holiday would have reached 100 years today if she had lived. Lady Day hails from my hometown, Philadelphia, PA, a place that consistently churns out folks who have great chops. She was one of the first Black singers to be backed by a White band (Artie Shaw). But segregation of the time made it impossible for her to continue with the group as the logistics of trying to tour were a nightmare (it was a given that she would have to board at a separate "Coloreds Only" hotel from the rest of the band, but more specifically, the fact that the act was mixed did not sit well with Whites in the South. so a complete tour couldn't do the nightclub circuit and would have to not play the southern states and hence, money would be lost too). After living a life of euphoric highs and abysmal lows, Billie passed on July, 17, 1959, succumbing to the effects of hard drinking and hard drugs. She was 44. God Bless you child for sharing your talent.