The world is a little darker today

Black Mamba and his 2nd eldest child passed from this dimension yesterday along with 7 other souls in a helicopter crash.

I can only say that I hope they found comfort with each other and had the time to say, "I love you" before all went dark. 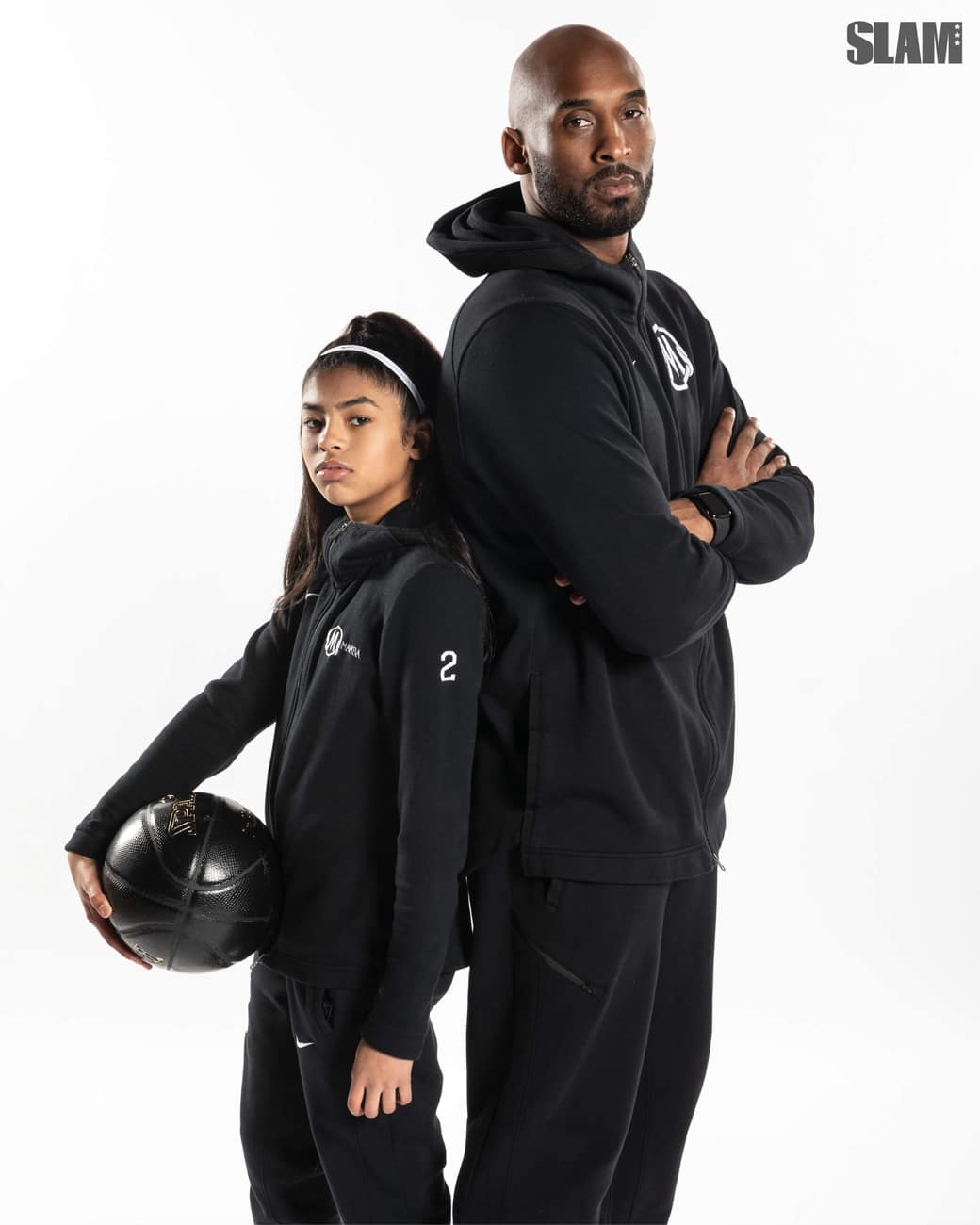 A cinematic instance where Black U. S. culture and the martial arts collided - "The Last Dragon"


I've lost count of my guilty pleasures.This gem is a product of the wild 80s ('85) a time when hair was real big to match one's shoulder pads.When fantasy films were coming out the wazoo - "Cocoon" "Splash" "Dragonslayer" "Ladyhawke" and on and on.

"The Last Dragon" centered around young Leroy Green (played by real martial arts master Taimak) who just wants to be as proficient in the martial arts as Bruce Lee. Tall order indeed. It stars Vanity as Laura Charles, a TV host accosted by a bad businessman, Eddie Arkadian (played by Chris Murney). Leroy saves Laura and falls for her. Unfortunately, Leroy's skill is needed further as Laura is menaced by a gang led by the most unique villian ever - Sho'nuff, the Shogun of Harlem (a memorable turn by the late Julius J. Carry)!

Just plain whacky fun. A cult favorite with a solid soundtrack with contributions by established singers and 2 hits by the then new kids - "Rhythm of the Night" by DeBarge and "7th Heaven" by Vanity. Julius J. Carry as Shogun Sho'nuff of Harlem (center) in all his glory
Posted by PJ DEAN at 12:15 AM No comments:

Today is the celebration of the Rev. Dr. Martin Luther King's birthday in America. His real birthday is on the 15th of January, but to keep things running smoothly in the corporate realm, it is celebrated on the second or third monday in january closest to his true birthday. Can't have pesky holidays popping up in the middle of the week disrupting the flow of commerce. Ah yes! Commerce must not be interrupted.

Y'all know how I feel about the version of King this country pimps as the one we on which we should fashion ourselves. The dreamer. The Peacemaker. The non-threatening Black person. The Black person who will allow you to pummel them while he/she smiles through the veil of blood running down his/her face. As I've said Dr. King was FAR from being that type of Black man by the time a bullet ended his life. By the time he was cut down, he was very much on the same page as Malcolm X. The two had come to an understanding that they were marked men because both realized that freedom wasn't free. That those in charge of one's freedom weren't going to give up that privilege, and that to gain one's freedom, a tussle was going to have to ensue. And for that they were assassinated. End of story. Go read King's last, powerful speech,  "The Mountaintop." He knew he was marked for death. You can hear it in his words. 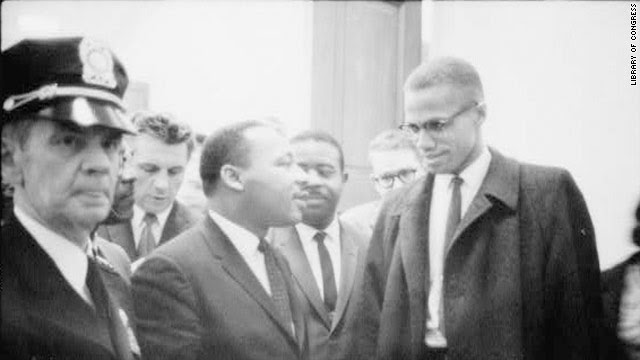 The revolution. That glorious revolution that many had hoped he and Malcolm would have fueled together with possibly a Fred Hampton? Not to be. And today there is no revolution. The powers-that-be have seen to it that the majority of Black folks are content with their cellphones and SnapChat and Facebook Live and WiFi and Netflix and Popeye's spicy chicken sammiches and fresh, hot Krispy Kremes. Yes, a lot of us have been lulled into what I call a seductive inefficiency - Not enough of what we need, but a lot of what we want. No. There will be no revolution until we wake up and put the "beguilements" in their place.

Until then Dr. King's legacy will continue to be distorted and used as a cudgel to whip us into shape while we smile.. 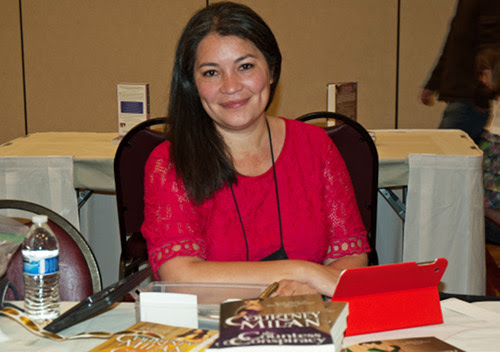 The RWA scandale has gone national! Good! Take off the nice white gloves. Now maybe some real work will get done in the romance writing INDUSTRY ('cuz that's what it is, a BUSINESS. A very lucrative BUSINESS for those who run it). And you ask, "Why I feel this way?" Because like the article says, "The gatekeepers are watching."

They aren't watching because the traditional romance writng industry is shocked and saddened by the organization's actions. Naw. The gatekeepers of the imdustry are watching as the industry does not like having its game peeped. Those in charge of keeping gates are charged with  keeping those gates closed to "others." And these handmaidens who work under the auspices of the companies who employ them and those who make up the Big 5 do not like negative attention brought to their so-called genteel front door. No sirree!

The RWA is supposed to be a model of diversity. A model of progress. A beacon. It was selling the dream for a bit there to eager "outsiders." Oh. the kumbaya of it all. A bright, shiny frontman for the romance writing industry, showing how we can all get along. Yeah. Right. As long as certain of us  keep quiet when we see abhorrent behavior. RWA effed up big time when they allowed the "aggrieved", those complaintants, those Women-of-the-White-Tears to coerce them into punishing Courtney Milan because she spoke up about the abysmal portayal of ethnic women, specifically Chinese women, in one of those chicks Scottish historical romances Ms. Milan has a right to object to Asian stereotypes when she sees them more than anyone else. She is of Chinese ancestry.

Anyhoo, the industry now has a big, old spotlight just a shining on it with this kerfuffle. I hope it burns the doors off the covert and overt racism in the RWA and in the romance biz. Traditional romance publishing has been justifying its ignoring non-White authors for years by citing the ever-popular chestnut of "ethnic" doesn't sell and "we need to maintain a budget so we need stuff that sells." They also have employed the use of the ruse of "downsizing," (the elimination of various imprints and the cutting out of mid-list authors to boost the tried and true ones). So, these excuses get used to when it's time to vet new authors period and  non-White authors definitely need not apply. Lastly, the final excuse for not going "ethnic" in a bigger and bolder way is that, according to the industry, readers have been abandoning romance books in droves. Sort of true. But the biz fails to say why. Readers had been dropping romance because it has become EFFING BORING! Case in point - the historical romance.  The biz admits it has accepted less historical romace manuscripts because readership has fallen off. Well, duh! I guess so. How many freakin' times is one going to read about another duke, his damsel and a country house/salon before one is going to simply drop those books from their TBR pile? Over the years, nothing new was being brought to the table, so yeah, people were bypassing the books as they were repetitive duds. BUT some genius graduate in advertsing or marketing thought up a twist on the historical - the "erotic" historical. Yep. That'll save the subgenre. I do hope these persons received free Starbucks-for-life cards.

Now, what if another venue had been chosen to boost flagging profits? Like say, what about bringing in new authors who were not White who wrote romance with a different perspective? Authors with truly NEW stories? Authors with NEW takes on the same old, same old? Authors who would challenge that a historical does not have to have a friggin' DUKE at its center or a blonde damsel? Authors who would bring "color" to a historical in every sense of the word.  Authors who would bring ACTUAL HISTORY to a historical romance? Just a thought. But no. Instead of beefing the genre up with true, varied insight, the biz went the easy route. It went for the sex alone. So, it rolled out historicals with BDSM pairings, bi couples, male couples, lesbian couples. Ok. Everyone deserves a love story. I understand it.

As I've said, there are a handful of non-White authors in traditional romance publishing, who get it right and who treat their characters like real people not stereotypes. Sadly, when they point out flaws, or outright bigotry, in the non-White characters in the historical romance works of White authors, they get roasted over a fire, called problematic, or in Milan's case, get censured and banned from the RWA, by a panel that was secretely drawn up behind the backs of  RWA board members. Talk about moving in silence! (These petty actions were allowable and taken against Coiurtney as she was once a part of RWA. On the board actually where she'd implimented policies to bring it into the 21st century).


So, yeah. The gatekeepers are watching and they are seething. Sitting up like prairie dogs and cursing those complaintants and the RWA  (in a civil fashion though. The gatekeepers will rip you a new one in a New York minutee on behalf of their employers but they must do it nicely) for exposing the three card Monte game the industry has been playing for decades with its "progressive" appearance. .

The saga continues. I need more popcorn.
Posted by PJ DEAN at 11:46 AM No comments: