My love-hate relationship with OUTLANDER, plus, did you know Jamie Fraser is a POC? Sorta.

I must confess. I like "Outlander." The books and the Starz series. I am not crazed though like the folk who are shell-shocked and walking around like zombies since season one ended last May. No. I am sane. They are not. But folks are missing a whole other sub-plot while they salivate over Jamie and Claire.

This story is a deft study in presenting POC without the POC. It's amazing really. Yes, the Scots are technically not a POC but in that era they are seen as "primitive, backward, uneducated, superstitious" by the English. And gasp, they are Catholic mixed with a heavy dose of believing in a fairy world. All those "traits"attributed to folk seen as inferior by folk feeling superior And for convenience's sake, the English found a lot of folk "inferior" and used it as an excuse to "help" them by bogarting their way into other people's land. Hell, they treated their own "inferior" like crap and sent "undesirables" to "the colonies" or to Australia. Ok. England had a loooong history of just rolling right up in a place and BOOM! "Have some tea. We like the view but not you, so please die, or submit, or get out. Thank you."

So, let's delve
.
Centuries ago, low born people were not worth considering and were to be avoided by all costs by the high born (not much has changed), unless the high born needed them for something. BUT...there is always the "call of the wild" , the call of the "exotic." Think of all those British explorers traipsing off to points unknown, searching for the "exotic." That pull toward the forbidden. Closer to the manse, there has always been both that Lord and Lady who are screwing both the scullery maid and/or the stable boy. This attitude that the "inferior" are good for service only has not died. And after the tryst, the so-called betters' duty is to remind the so-called inferior of their class constantly in any way possible.

Which brings me to Claire and Jamie.

Claire (England) is a stone pain in the ass. Sorry but she riles me up with her airs. It took me a long time to warm up to TV Claire because basically she is that know-it-all-chick who walked into the end of a play and wants everyone to stop and fill her in. Don't get me started on how this intelligent woman touched a HOWLING, SCREECHING, VIBRATING stone while a wind from nowhere kicked up all around her and thought nothing was gonna happen to her. What do I call a person like that? Besides six screws loose and the rest missing? Privileged. Arrogant. Clueless. All of them because that person walks around thinking nothing bad is ever going to happen to them because said person knows it all. Yep, that's Claire. And no, it's not because she's Caucasian. I hang with plenty White women who would have RUN, just like me, when that stone started moving and singing. Claire just thinks the world revolves around her and that which is between her legs.

Now, I am floored, positively floored, that readers, watchers (mostly women) have NO problem with Claire's sexing up Jamie. Girlfriend got tipsy to ward off wedding night jitters with basically a STRANGER AND THEN BANGED HIM WITH ABANDON WITH NARY A THOUGHT ABOUT THE HUBBY SHE LEFT BEHIND IN THE 20TH CENTURY! Sex outside marriage when the other partner has not sanctioned it is not liked by romance readers (and let's face it. this series is romance no matter how much Gabaldon distances herself from the genre now). The woman is MARRIED. Outlander is a romance. I know Claire married Jamie for safety, so getting carnal with the hot Scot ONCE would have been enough to make it legal but in my mind, girlfriend dropped trou for this guy a tad too quick. It just has always been a sticking point for me. Couldn't she have taken refuge in the nearest convent/abbey/church until she could get back to those stones? She and her husband (Frank) in the future had a good relationship. In the book, they were trying to recapture the spark in their marriage after 5 years apart due to WWII. I think more soul-searching, more hand-wringing, more hesitation on Claire's part would have sounded more true in her facing her predicament.. Her accepting Jamie into her bed, on a permanent basis, so eagerly, always rang false to me. I mean she supposedly always had her mind and eye on getting back to the future through those stones! Why acquire a husband? Especially a supposedly, "low-born" one? And us being alerted constantly that she is "high-born" "of gentle birth" yadda, yadda, yadda, English.

Which brings me to the POC part.

Jamie (Scotland) is a gorgeous, untamed, wild hunk of the Highlands. At least that is how he is presented. BUT he is as "high-born" as Claire or even more so. He is Laird in his own right. Nephew of a laird and of a war chief. Well-educated. Intelligent. But his refinement and his connections to refinement are not brought up the way Claire's background is harped on. He is pimped as soldier, fighter, warrior, enthusiastic lover, outlaw. All those "bad boy" labels that "high-born" ladies who like slumming, love. Geezus Christ! The only thing missing is a motorcycle. That unequal equal the good girl can screw and leave behind. Sorry but deep down, that's how I think Claire sees Jamie. She loves him because he is NOT anything like Frank, not for him alone. Plus, she's being "high born" by making do by doing this handsome "low-born, manly guy until she can leave. Frank was the pleasant, English gentleman. Jamie lets her get loose and down and dirty. Even the sex she had with Frank was tame compared to the sex she has with Jamie.

Claire reads like the stock heroine in every frontier/foreign land romance book where the "civilized" chick travels to the wild, and finds herself through doing that just wild enough "heathen half-breed." He brings her orgasms and she brings him to "heel." Jamie in his kilt. Do not. Do not. Do not get me started with that kilt. That issue of Entertainment Weekly with the characters of Jamie and Claire on the cover showed Jamie's kilt as sex accessory inside. I mean is there anything he DOESN'T do in that apparel? Jamie might be Scots and European but remove him and insert "Native American chief and his loin cloth" "African prince and his dark skin/loin cloth," "Pacific Islander prince and his loin cloth"  "Sheikh and his burnoose," on and on. You get the picture. Jamie could be Shaka, Mako, Chief Running Interference (or some such nonsense), Prince Ahmed or fill-in-any-noble POC. After all is said and done, he is reduced to his chic, ethnic garb as sex accessory, and what's under it.

A man in uniform. An officer and a gentleman. A groundbreaker. Valaida Snow - According to Louis Armstrong, she was the 2nd greatest trumpet player after him


A lady, who lived a colorful, and adventurous life, who toured with Josephine Baker and was one of the "Gentle Women of Jazz." 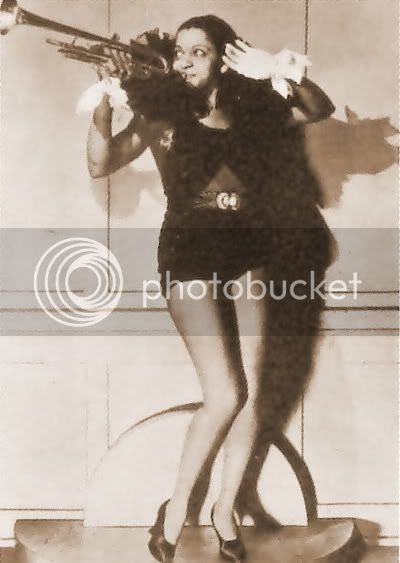 Throw Back Bands! DEBARGE vs. THE SYLVERS!

Debarge, that group from Detroit MI with the guy with the smooth falsetto. And with just as much drama as the Jackson Five. But they had some beautiful songs. Siblings Bunny, Bobby, El, Mark, Randy, James, Tommy, Chico. Phew! I think that's all of them.  Some were in a spin off act (SWITCH) and all tried their hands at solo performing. El had the biggest success. That voice. I mean I'm sure dogs fell over deaf at the notes he can hit. They had such great harmony but sadly none in the family. Drug addiction, AIDS, childhood sexual abuse, prison stints, a host of illnesses Just sad. Anyhoo, they were all that when they were together and making music. I liked their sound.


Now I bet you forgot THE SILVERS.

I picked this pic for the hair alone. I. LOVE. THE. HAIR. Where is my Afro Sheen? My oil spray? Oh. Ok. I'm back. In any case, they were ALWAYS compared to the Jackson Five. ALWAYS. A family act from Watts, CA. active from '71 to '85. There were TEN of them. TEN. But only nine ever performed. They would change in and out but the constant was the one named "Ricky" that the girls screamed over forever. You can guess which one he is. They disbanded in 1985 after dance music waned but pursued work as back up singers for bigger acts like Janet Jackson. Out of the ten, eight survive.They were touched by prison, death and illness also but keep striving.

All in all, I listened to these bands gift and watched them all on Soul Train and The Midnight Special . Remember that show with Wolfman Jack? Oh. God, I'm old.
Posted by PJ DEAN at 4:36 PM No comments:

Throwback Bands of the week! The SOS BAND and ATLANTIC STARR, cameo by Will Downing


These blasts from the past produced some damned good dance tunes and ballads. The S. O. S. Band was founded in Atlanta, Georgia. It is an electro-funk, R-n-B group that performs under several incarnations today.One incarnation is coming to an expo near me on March 12th. Talk about a treat! Anyway, I always felt what set them apart was their use of the electric keyboard. I like all their stuff BUT one of their hits, (produced by the then new-to-the-game, Jimmy Jam and Terry Lewis) Just Be Good To Me, has the baddest intro I have heard in years. NOTHING tops that intro. NOTHING! I could listen to it forever. The song's lyrics rub me the wrong way but between the keyboard wizardry and the vocals, I am sold. Other cuts include Weekend Girl, Take Your Time, Tell Me If You Still Care.

ATLANTIC STARR, a group from White Plains, NY. Yet another band that tours in different incarnations, they are known for the R-n-B, funk hits, Secret Lovers and Always to name a few. My favorite of their's? Send for Me. A beautiful ballad also covered by singer Will Downing. Both versions are heaven sent! Compare. 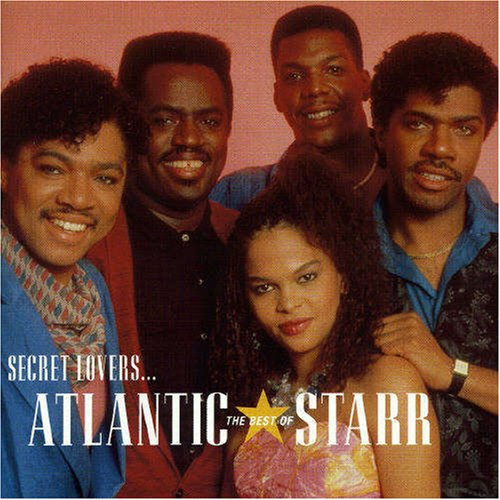 
Some timeless music despite the Jheri Curls. Hey, I can overlook it. And no, I NEVER had one!