Joyce Bryant - The "Lost Diva,' Vocalist and nightclub performer from the 40s and 50s

Yes. Joyce had her eye on films but she was so hot the film industry didn't know what to do with her. Like usual when it came to Black, female performers considered "sultry"  and "too sensual" for the film-going public.

A public at the time (and to an eextent, today) that was largely White, rather bigoted, and whose female movie-goers were having conniptions when they saw their hubbys or boyfriends or male family members got all worked up over watching a negress emote. Talk about insecure.

Anyhoo, as with most Black female actresses who didn't fit the comfy, neuter "Mammy" mold or prim helpmate part (Lena Horne, Dorothy Dandridge, Ketty Lester, Eartha Kitt, etc), acting became an aside, an afterthought. Performing in nightclubs became the butter for their bread. Still, nutcases used to send death threats to her venues. The KKK once burned her in effigy. Those cretins do things more than once, so I find it hard they'd only do it a single time. That's their mainstay. 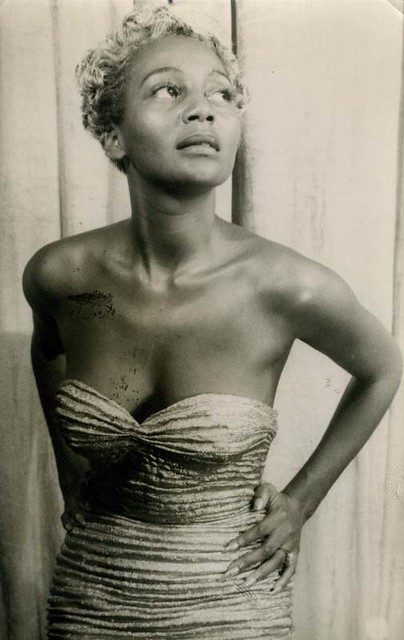 But Ms. Bryant was still slaying them in the aisles in the clubs. Her trademarks were her silver hair (courtesy of radiator paint!) and her extremely tight, low-cut, mermaid gowns. Dresses so freakin' tight it was said she was sewn into them and to attest to their impracticality, she had to be carried off the stage after performances due to their constricture.Girlfriend wasn't just all about the look though. She had a 4 octave voice 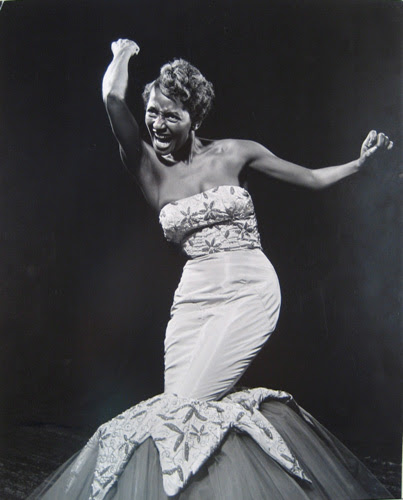 Dubbed the "Black Marilyn Monroe" and the "Bronze Bombshell" she was too sexy for a lot of folks. Banned in Boston due to her song "Love for Sale," she got banned from airplay and from performing in other cities. Ms. Bryant retired at the height of her career at age 28 in 1955. She was tired of organized crime's hold on nightclubs, plus, she'd been beaten up by a man whose sexual advances she'd turned down (Personally, I do not think it ended there. If the cretin was bold enough to proposition you, you then turn him down and he beats you...I say a rape happened afterward. The two go hand in hand). As a Black female performer she was seen as "pretty meat." "Pretty meat" hired to entertain an audience. "Pretty meat" who no matter how ill had to hit the stage or be sued. During one stint, she had a throat so stressed out from doing 8 shows a day, the club owner called in a doctor to examine her. The result? Doc said he could spray her throat with cocaine so she could sing but informed her she'd be hooked. The club owner's response?  "I don't care what you do, just make her sing." Joyce had no say. WOW. "Pretty meat" indeed.

In the mid-50s she retired to to pursue other endeavors after devoting herself to her Seventh-Day Adventist Church. She returned years later as a classical vocalist and then as a vocal coach. The Civil Rights Movement beckoned and she answered.

Now 90 years old and plagued with Alzheimer's, she lives on in the memories of those who saw her at her peak.

Think you know all about Memorial day in the U. S.? Think again

Well if you didn't know, Memorial Day, or Decoration Day, has some very contentious origins.

It involved a certain Gen. John A. Logan, head of the fraternal group, the Grand Army of the Republic, who'd rallied for remembrance of the Union soldiers who'd perished during the Civil War and who'd urged for protection for freed slaves and freed slave soldiers. During the same speech he responded to July 1866 newspaper reports that southerners were "decorating" the graves of dead Rebels. Something that didn't sit well with him.  So, two years later in formal response (why the delay?) the General, on May 5, 1868, ordered the same "decoration", nationwide, for all war dead - MAY 30TH- DECORATION DAY. Years later in 1967, it became MEMORIAL DAY 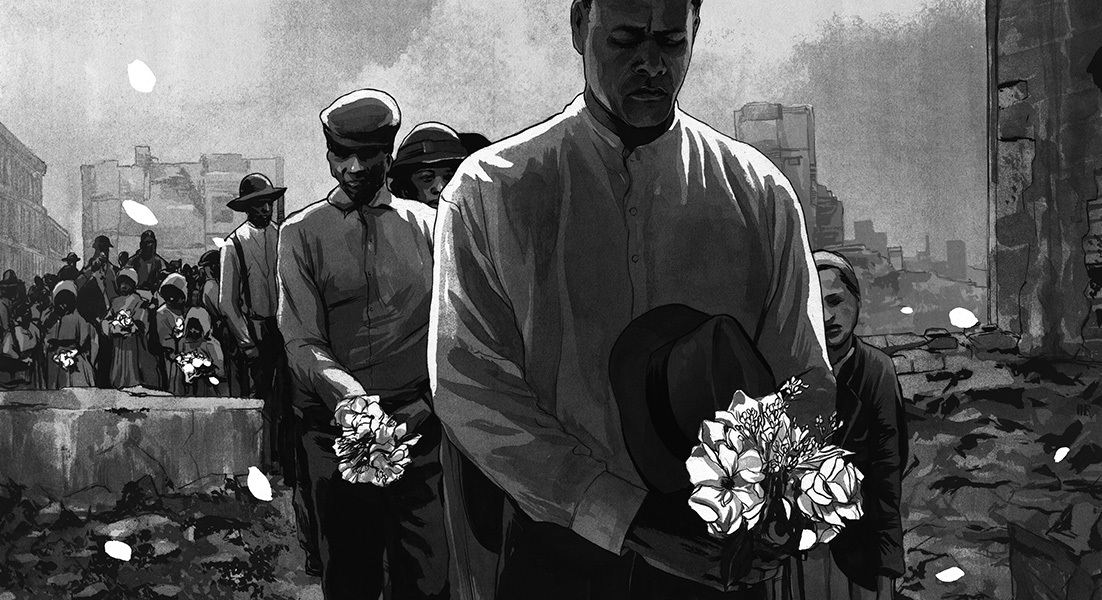 Now this story is contested by many and has many versions.

I just say if you want to honor war dead, pick your tale and honor them.

Remember them on that day.

HAPPY BIRTHDAY TO A LEGEND. 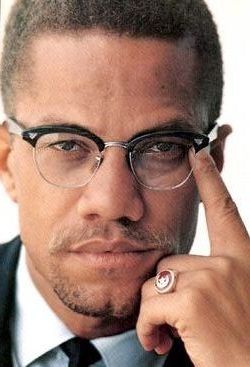 (ONE OF MY HEROES. REST IN POWER)

HAPPY MOTHER'S DAY TO ALL THE MOMS AND TO ALL WHO LOVE THEM!

MY TWO FAV SONGS FOR THE DAY. THEY ARE A BIT SAD, BUT, HEY, NOT EVERYONE HAS THEIR MOM WITH THEM, BE IT THROUGH DEATH OR INCARCERATION. NOR HAS EVERYONE EVER EVEN KNOWN THEIR MOM .

WHATEVER YOUR CIRCUMSTANCES, THINK OF YOUR MOM TODAY.

https://www.youtube.com/watch?v=zR-7YfQAnHM&t=10s - "I'LL ALWAYS LOVE MY MAMA" BY THE INTRUDERS

https://www.youtube.com/watch?v=JXFuDXMGBN8 - "SADIE" BY THE SPINNERS One of the originators of ragtime and jazz - New Orleans own, Charles "Buddy" Bolden Charles Bolden. A man who was one of several who laid out the blueprints for ragtime music and jazz. He and his band members played everything by instinct as none of them could read music. The New Orleans native, born Sept. 6, 1877, was a master cornet player. His admirer and up-and-comer, the young Louis Armstrong, chose a windwood instrument too to express his talent - a trumpet.

"Buddy" Bolden rode the wave of fame for years. After awhile those usual tools exerted pressure on him - the racism, the instant wealth, the excessive drinking, his "playa" lifestyle though married..Typical story of the country boy getting too much, too soon sprinkled with bigots.

Bouts of mental illness plagued him until he was finally committed to a psychiatric facility in his 30s. His mental health continued to decline and he remained under the stae's care until his death in 1931.

A film of his life was released today with music played in his style by Wynton Marsalis.

Learn more about Charles "Buddy" Bolden at the links above.


Buddy Bolden and his band 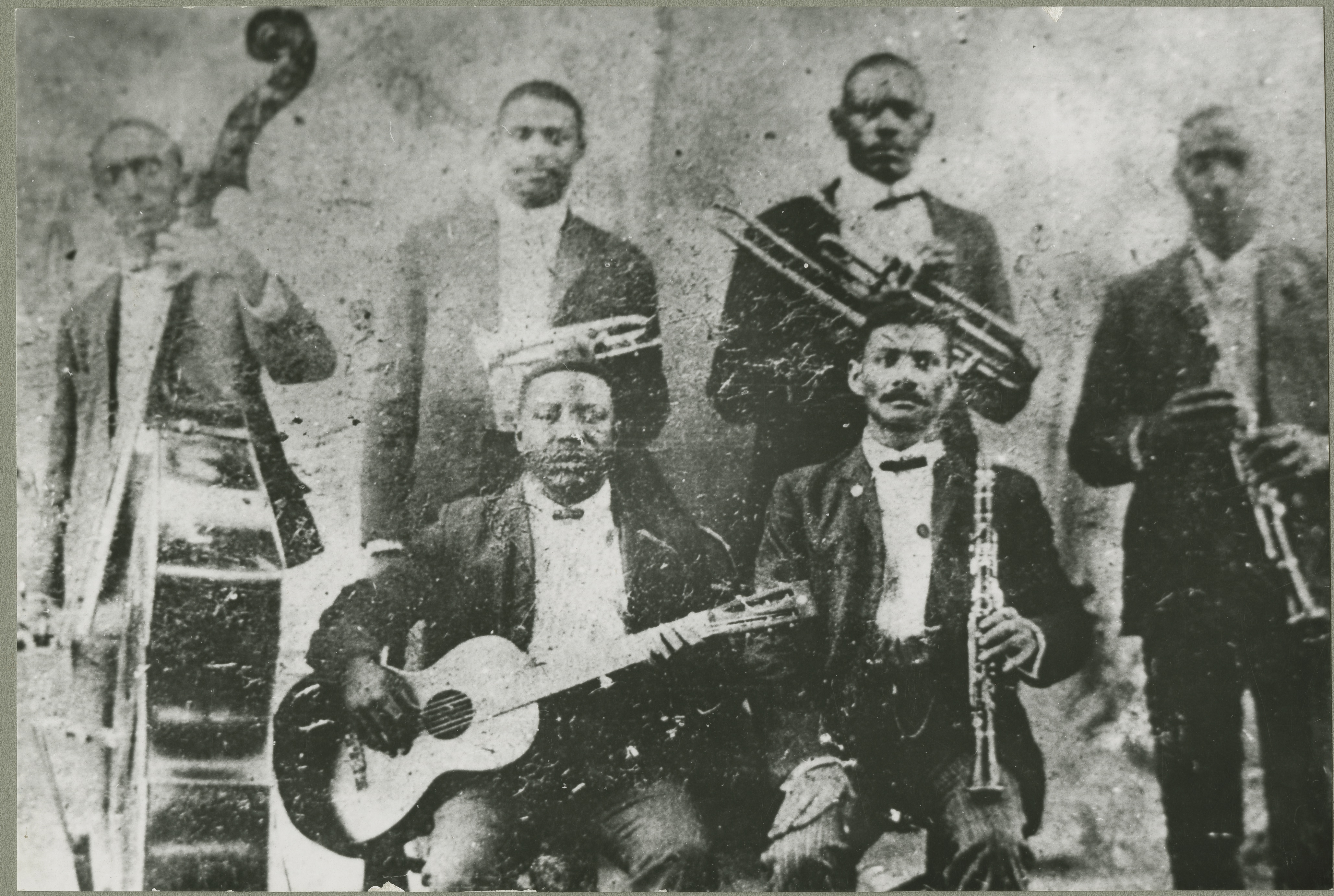