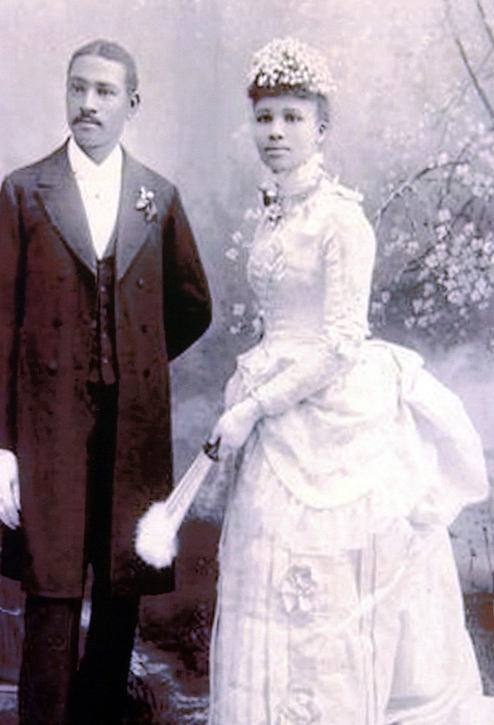 Charles and Willa Bruce  Photo courtesy City of Manhattan Beach staff report
The beautiful, young, regal couple (Charles and Willa Bruce) pictured above were the proud owners of a thriving beach-front resort, they'd built with their sweat and labor, in Manhattan Beach, California in 1912. They'd bought land for $1225 and added parcels over time. The resort comprised a dance hall, a cafe, and a bath house and of course the beach. It was a haven they'd established for BLACK people at a time when we were NOT allowed entrance to establishments run by, and occupied by, Whites. It was called Bruce's Beach.
Sadly and shamefully, over time Whites in the area began vandalizing the property, ruining the vehicles of the Black patrons and finally, invited the KKK to pay a visit in 1920. The couple pushed on through every adversity until the city condemned the property and the accompanying parcels in 1929. L. A. seized the resort through the pretense of "eminent domain" stating it need the land to built a "much needed" city park for the area.. The Bruces were put out of business and all the other Black families living on the parcels the couple had purchased were forced out too.
The Bruces and the displaced families fought in court and were awarded paltry sums for their effort. The couple could never re-gain their initial momentum, and as part of the settlement, if they had ever been able to rebuild,  they were not allowed to open a business any place else  in the city. They ended their days as servants for others instead of being the masters of their own fates as they had planned..
But that wasn't the end. More horse shyte went on. The "much needed" park wasn't built until 1960! And that's only because L. A. was nervous that descendants might notice that the land was VACANT AF! after all that whining around needed recreational space and SUE.
Anyhoo, after that horror story a fairytale might emerge.
There is a chance the descendants of the Bruces might be able to reclaim the land. But I wouldn't hold my breath if I were them. The Manhattan Beach City Council adopted a resolution acknowledging and condemning the city's actions. No mention of restitution. No fine "how do you do." Sounds like good old lip service to me. Lip service how you question? Let me give an example.
Example: Let's say you're visiting me and you bring your bad-ass kid. And you know your kid is bad. Said bad-ass kid bangs on my glass coffee table with its Tonka truck and shatters the surface. All you do is say, "I'm so sorry." You clean up the glass and leave. No go, hunty! You need to clean up, apologize, offer to replace my coffee table and PAY for the replacement. Otherwise, it's small claims court.
This type of half-assed action after doing major theft from Black/Brown/Indigenous people is de rigueur for this land's system of gov't be it local, state or federal. It's that "piss on me, and tell me it's raining and be happy it's warm" type of legal move. Fight, Bruce descendants! Fight!
The Manhattan Beach City Council's resolution is a start. See how far they are willing to go to right a wrong performed by an ill-mannered child almost a century ago.